Posted on 20 September 2017 by brucefuimus

It’s not often I get that emotional about my family history – but I did today. My great grandparents, George Bruce and Mary Ellen (née Bates) had two sons (grand-pa Jack and great-uncle Bob) and three daughters. Sadly, the three daughters all died in childhood – Julia (died aged 1, 1897, Oldham), Nellie (died at 21 months, 1903, Hanley) and Mary (died in 1911 at Crewe from diptheria, aged 6½). I have been trying to find Mary’s grave in Crewe Cemetery for years – today I believe I succeeded. 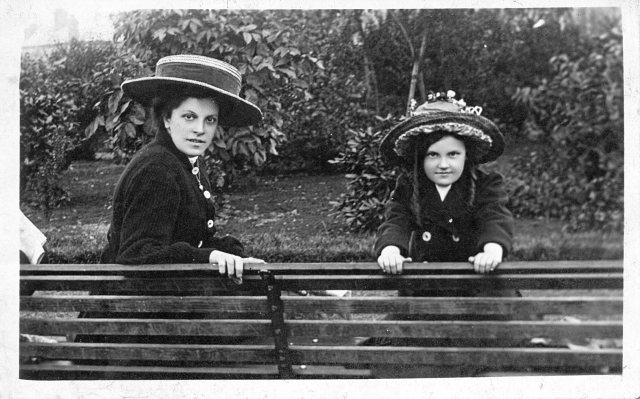 Back in 2004, the Crewe & Nantwich cemetery people told me that Mary (whose full name was Mary Augusta Bruce, after her mother and her aunt) was buried in grave 4811, Division A. I tried to find her grave, working from the numbers that might (or might not) be incised into the gravestone or on a ceramic marker next to the stone. I failed dismally. I found the end of a row that suggested she should be at the start of the next row – but failed to find that start – some rows are numbered in one direction, others the opposite, and some seem to start in the middle of a plot.

Very recently, DeceasedOnline added grave registers for some of Cheshire East, including Crewe Cemetery. The page for Mary showed two things – firstly, just like Julia and Nellie, Mary was buried in a public grave – these are owned by the council and several, unrelated, people may be interred in them until full. In Mary’s case the grave had another burial eight years after. The second, seriously useful thing, was that the adjacent two graves (4812 and 4813) both had gravestones, making them easier to find – Mary’s, of course, was anonymous.

Now, today, I wasn’t actually looking for Mary, but I had got all the stuff ready, just in case. I failed, for whatever reason, to find the stone that I was looking for, so turned to the image of Mary’s page in the grave register. And the hairs on the back of my neck rose up. The image said that the two adjacent graves were for Clayton and Hughes, and I was sure that I’d been looking at those two stones just minutes earlier. Shortly after, I was standing in front of those two stones again, trying to relate the page on my ‘phone to the stones on the ground. According to the register the three plots, reading left to right, should be:

Unfortunately, the three plots all had stones and were:

No room for Mary. She was still lost. Deflated, I returned home.

Once home, I got the laptop out – there’s a limit to how much you can see on a smart-phone, though standing in the middle of Crewe Cemetery, logged on to a major genealogy site, is still pretty impressive. (Why does the Cemetery have such a good signal?) When I checked the Edmund Percy grave again in DeceasedOnline, I discovered something odd – it was cross-referenced to a different page and had a grave number of 4812, just like the Clayton grave. The actual sequence, it now appeared, was:

Now bureaucracy just doesn’t work like that. Those numbers are supposed to identify the grave – they really should not repeat. I can only think of two explanations. Either Edmund Percy was actually buried in the Clayton grave and his gravestone had to go on 4811, given that 4812 already had a stone, or, some space in that area, perhaps even 4811 itself, was later sold to the Percy family and it got squeezed in with the 4812 number in the register books. Whatever the truth, I am convinced now that my great-great aunt, little Mary Bruce, rests more or less underneath the Edmund Percy stone.

The 3 stones at the front are for Hughes, Clayton and (flat) Percy. I believe that Mary Bruce is buried (more or less) under the Percy stone. Copyright Adrian Bruce, 2017